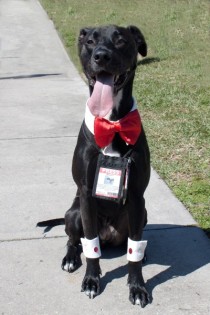 In 2007 "Olive" was adopted from Suncoast Animal League.  Smart and eager to enter the world of journalism, Olive began her writing career as the "Chief Investigative Reporter" of the yearly Mutt March.  Devoted to her craft, she participates in the Mutt March each year and reports on it afterward.

Click one of the following links to read her yearly report: